I know it’s smart to start getting regular mammograms done once you turn 45 but what with getting teenage boys over the finish line to adulthood, getting remarried, getting IVF, getting pregnant then having a baby (what seemed like) permanently attached to the ‘girls’ for 18 months, I found it hard to find the time … until last Friday.

Despite having a close friend who had a brush with breast cancer and knowing all the stats, I didn’t actively seek out a mammogram once all my excuses had dried up (so to speak). However, a simple throat infection and a visit to the doctor about a month ago saw me put firmly on the Breast Screening list and lined up for an appointment.

Now I’d heard a few reviews regarding mammograms, particularly with the words “extreme discomfort” and “mashed boobs” featuring regularly so I was prepared for a bit of pain. Imagine my surprise when it was all over bar the shouting in a few minutes with the only discomfort coming from trying to hold my breath AND my stomach in at the same time.

Which has me wondering … is there a Flop Factor at play here? I can imagine if your fun bags are nice and firm and well adhered to your chest area that it might be a little harder to get them in between the two panels and the pressure may be more easily felt than say if your boobs, once let loose of their wire-reinforced hammocks, kinda oozed onto the bottom panel and obligingly made squishy under the top one so the radiologist could snap a clear shot with ease.

After that, a little clamping between two plates is more like a walk in the park … just with your shirt off.

For the first time in almost 2 years, I wore a non-maternity bra to work today.

It feels a little sad …

She’s not happy about it but the fact of the matter is the stress of working full time and feeding less during the day has taken its toll and no amount of night time snacking is going to fix that.

Add to that a diet change and voila – what little milk supply was there has pretty much gone.

We’ve had a good innings but I can see the end in sight and whilst part of me rejoices at having my body back (and part of NIH rejoices at the prospect of having HIS particular area of amusement back), part of me weeps.

It’s truly the end of an era.

There’s so much information around about breastfeeding nowadays but something rarely discussed is the fact that no two breastfeeding sessions are quite the same. Sure, the mechanics are comparable but every feed is an adventure and you’re never quite sure how it’s going to go down.  As a former librarian, I have been known to enjoy a bit of cataloguing in my time, including the selection of appropriate subject headings and classifications. This post has been brewing in the back of my mind for some time and finally I think it’s ready to be shared.

Of course, every baby is different but here’s the 7 Breastfeeding Categories I’ve become all too familiar with over the past 16 weeks: 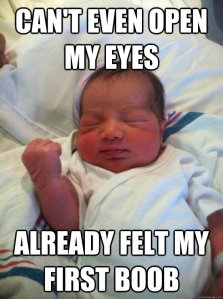 Sometimes called “The Tiny Octopus”, this one is part of the newborn phase.  It’s characterised by the eyes closed, head wobbling, mouth gaping, arms flailing baby that is desperately seeking yet not quite finding the nipple. Meanwhile, you’re desperately trying to hold them, move the flailing arms out of the way and guide them to said – usually excruciatingly sore – nipple that’s RIGHT IN FRONT OF THEM, all with two hands.

Solution: Someone that you don’t mind getting up close and personal with your boob to shift those arms out of the way comes in handy – or grow an extra set of hands yourself. Whichever seems more achievable.

Usually occurring (at least in my experience) in the wee small hours of the morning when the ‘girls’ have had a 7-8 hour break and are fully charged and ready to rumble. Baby latches on and gets more than bargained for. Cue coughing, choking and splutterings galore accompanied by startled looks and whole body flaps like a good-sized fish encased in terry towelling.

Solution: Fight against the flapping and sit baby up with a cloth to catch the overspill. Wait til baby stops gasping like a goldfish that’s hurled itself onto the lounge room floor. Discuss with baby how there’s a tube for eating and a tube for breathing and it’s a good idea not to get them mixed up. Start again – but this time, lean right back and let gravity make it easier on the poor little mite.

Once baby feels they are master of your domain (between 3 -4 months), they’ll start to experiment with different positions. That’s fun. For instance, did you know you can breastfeed standing up without a sling? Either did I until Little Miss decided that was the ONLY way she was taking it yesterday. For the past week, I’ve experimented with different positions in an attempt to appease the small dictator. For instance, she’s now decided that she prefers her feed from the right side lying down … which is fine when we’re home but not so much out in public.  I tried the football hold to see if it was about angles but she’s so long now that it was just ridiculous. Even she thought so (I could tell by the long-suffering look she gave me just before she yelled). I strongly suspect it’s so she can lie on the floor, eat and watch TV over my shoulder all at the same time. Hashtag multitasking like a boss.

Solution: If you can, go with it and try different positions. It makes for entertaining stories when hubby gets home and is far better than suffering the Bucking Bronco.

They said they were hungry and it is about time for a feed. So how come they latch onto the nipple, only to rip themselves off a few seconds later and bounce around like a bucking horse trying to dislodge its rider, all the while yodelling like the Lonely Goatherd? Who knows? Babies are fiendishly fickle.

Solution: Try another position (see Babysutra). If that doesn’t work, try burping. If it’s still no good, tuck the girls away and change tack completely. If you’re feeling particularly cranky, you can tell baby that she’s not getting out of it completely and you’ll just be serving up the same dish later. She’ll probably fix  you with an “I don’t care” stare but at least you’ll feel better.

Baby comes at your boob like a swashbuckling sailor, complete with one-eyed squints and attack cries of “arrgghh”. Boob is grabbed and motor-boated with delight before latching on. One arm wraps around the back of you and pinches the skin underneath your armpit while the other heads up top and beats on your chest. There’s groans of pleasure, lots of lip-smacking and even a few heave-ho’s between boob changes before collapsing in a milk-drunk heap with the nip hanging out one side of the mouth.

Solution: Nothing. Drunken Pirates are highly physical and very loud but generally good-natured. If you are feeding in bed beside your partner in the middle of the night, you could move to another room … but why should you be the only one to suffer?

Similar to Drunken Pirate but less boisterous and more exploratory. Baby licks the nipple before latching on … then pops off … then licks … then latches on … etc etc. Meanwhile one hand is delicately stroking the skin under your armpit while the other is lightly caressing top-side. All this is done while baby has positioned their head so they can eyeball you intently. Whilst one understands baby is exploring and making sense of the world, one can’t help but feel slightly toyed with.

Solution: Pray they’ll grow out of it … or try not to make eye contact if it’s really creeping you out.

This is the classic Hollywood version of breastfeeding. Baby snuggles into you, eventually wrapping her entire body around you as she grows longer. Hands are similar to the Pervert position but there’s no creepy stroking – they’re just there, warm and soft and lovely. Eyes are closed, latch is perfect, feeding is pleasant and quiet.  Ahhhh bliss. When it happens at the 2am feed, there’s nothing quite as calming and peaceful. You find yourself gazing with bleary-eyed adoration at the little angel, and not even minding being woken in the middle of the night. Best of all, they finish with a sigh and let you put them straight back into bed without a whimper … or a loud and grunty poop.

Solution: Soak it up and enjoy it for as long as it lasts. In reality, they are little babies for such a preciously short time and you’ll actually find yourself looking back wistfully on this part of your life … once you’ve had enough sleep, that is.