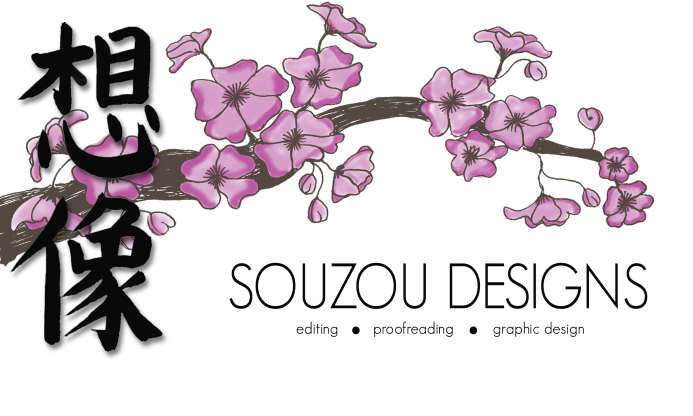 Otherwise known as “What in blue blazers do I want to call myself that doesn’t sound cliché or pretentious or dorky?”, it’s a process that hasn’t been very easy for me.

After much internal debate, internet searching and musing in the wee hours of the morning, I decided to focus on something Japanese, since both my better half and I have a bit of a love affair for the country, its people and philosophies.

Souzou in Japanese means ‘imagine’ or ‘imagination’, which I thought was rather fitting since I need to use so much of it with some of the jobs I do. I chose cherry blossoms, or Sakura, as they only flower for a very brief period of a few weeks (we were so lucky to time our week trip right at Cherry Blossom time this year!) and are thought to represent the ephemeral beauty of life. Hopefully the fleeting nature of its flowering won’t in any way relate to my business!

I drew the cherry blossoms with pencil then traced over with felt tip pen. I scanned the design into Photoshop and painted the colours in. I had to buy the Japanese calligraphy for ‘souzou’ but it was cheap and worth it to make sure it was legit!

I really like it – which is rather important since this is my ‘brand’ now. Funny though – it’s one thing to come up with a logo but entirely another to register it as a business name and then start using it. I guess it’s commitment to myself as a business entity and the logo is a rather large chunk of me up on display. Very personal and a little unnerving … but they say that growth only comes when you step out of your comfort zone.

Well, gosh I hope not as this is the area I am currently neck-deep in with my graphic design studies and knowledge! Whilst I like tinkering with web page design, I don’t think I’m ‘all that’ with it. Being a recovering Librarian, I am all about the paper.  As part of a study module, I had to write an article on future trends in the area of expertise I wanted to … become an expert in?

So here it is, in all it’s glory. Should you be interested in reading it, by all means go ahead. It’s not long. And has pretty pictures in it (some I didn’t even swipe from the internet but made myself).

And if you have any particular thoughts on whether you think print is about to be wiped off the mat or is here to stay, please feel free to leave a comment! (you’ll be included in my final assignment submission hehe)